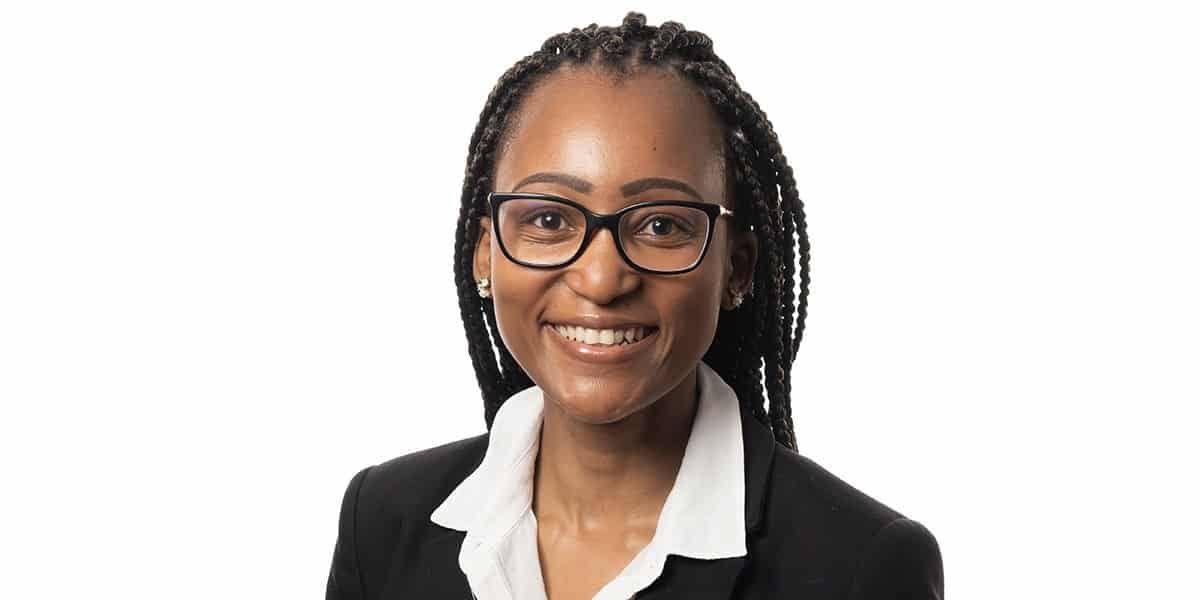 Mbali Kubheka is a middle child with two brothers, and she grew up in Ilitha Park, Khayelitsha.

Mbali’s parents wanted to give her access to better education and enrolled her in St Paul’s Primary School, in the heart of Cape Town. Here she became Deputy Head Girl and one of their top-performing students.

She attended Camps Bay High School through a Kay Mason Foundation (KMF) scholarship and went on to obtain a BCom (Hons) in Financial Management at Stellenbosch University. Today, Mbali is an Investment Banking Associate in the Export Credit Finance Team at Nedbank Corporate and Investment Banking (CIB).

On completion of primary school, Mbali received a full scholarship from KMF to attend Camps Bay High School. She said: ‘This was a big adjustment from St Paul’s Primary as I was no longer in my comfort zone. The academic standard was quite high, and the school culture was vastly different to what I was used to. I eventually became accustomed to the new environment, and I started performing academically. Every year, I received all my stationery before school started and my school fees were always paid on time – something I was always grateful for as it allowed me to focus on my studies.’

In Grade 9, Mbali was recognised as one of the top-performing students in her grade and was placed in the top class.

‘This was followed by subjects’ awards and placements in the top 10 achievers lists. I expanded my involvement in the school through participating in sports and I played first team hockey. I was also involved in school societies, such as Interact, where I served as Treasurer and Committee Executive.

‘As a reward for my achievements, I was granted the opportunity to go on a student exchange in Italy at the beginning of Grade 11. The Italy exchange programme was an initiative the school did annually, and KMF decided to fund me that year. This was a life-changing experience, as it exposed me to a world I did not know existed. The trip also made me realise that there was a better life outside of where I was raised and that I had the power to change my own narrative,’ she said.

At the end of Grade 11, Mbali became a prefect.

She fell ill in the middle of her matric year and this took its toll on her studies. After matriculating, she felt that her final matric results weren’t a true reflection of what she could’ve achieved and she decided to enrol in the SciMathUS Programme at Stellenbosch University.

From student honours to investment banker

‘When I started SciMathUS, I set a goal of getting a distinction in Mathematics and a full scholarship for my university studies. I left SciMathUS with five distinctions – one of them being in Mathematics. I also received the Stellenbosch University Recruitment Bursary, and a full scholarship for my undergraduate studies from the Shell Bursary Programme. The following year, I started my studies in BCom Financial Management and Investment Management at Stellenbosch University.

‘By the end of my undergraduate studies, I was a Golden Key International Honour Society Member, I had made it on the Dean’s Merit List for Financial Management 354 and I was accepted into Honours,’ she said.

During her Honours year, Mbali applied for the Nedbank CIB Graduate Programme after finding out about it through the Stellenbosch University’s career office. She had always wanted to become an investment banker and relocate to Johannesburg.

‘My job entails structuring insurance-backed funding for developmental projects in Sub-Saharan Africa. We assist borrowers in raising competitive export credit agency (ECA)-supported and commercial financing to facilitate their acquisition of capital goods, equipment and/or the roll-out of infrastructure projects. When financing sovereign transactions in support of Ministry of Finance, our focus is mainly on developmental projects that are strategic for the country and those which are a priority to government.’

In a recent interview on the Nedbank CIB website, Mbali had this to say about her job in export finance:

‘What excites me most about export finance is the industry’s ability to impact numerous countries through the financing that we provide. The development of Africa is a cause quite close to my heart and being able to play a role in the continent’s development through my job makes it even more worthwhile.’

A message to KMF scholars

‘To my fellow Kay Mason [Foundation] sisters and brothers, my advice to you is to seek out opportunities and take the initiative to find unconventional careers.

‘Dream big because you can only go as far as you see yourself and reach out for help, there is always someone who’s willing to assist you. Most importantly, your circumstances do not define you, you define your own journey.

‘And when you make it, remember that your life experiences are valid. Don’t be ashamed of who you are and where you come from, there is always something that someone else can learn from you.’

Visit our Support Programmes page for more on the KMF model – Selection, Accountability and Support.

Facebook-f Linkedin Twitter Instagram
© Kay Mason Foundation 2022 | All rights reserved. Privacy Policy
Manage Cookie Consent
To provide the best experiences, we use technologies like cookies to store and/or access device information. Consenting to these technologies will allow us to process data such as browsing behavior or unique IDs on this site. Not consenting or withdrawing consent, may adversely affect certain features and functions.
Manage options Manage services Manage vendors Read more about these purposes
View preferences
{title} {title} {title}